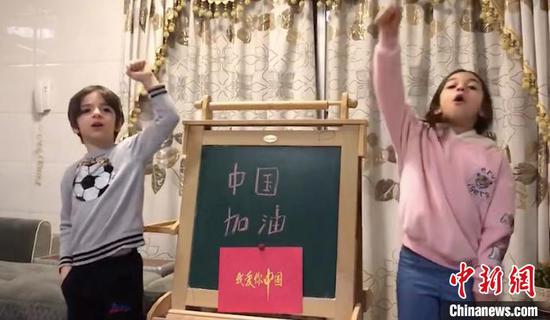 (ECNS) -- Some foreigners in China are showing confidence in the country's efforts to battle the epidemic amid the novel coronavirus outbreak.

A video shot by Mohammed Shalabi, a Jordanian who runs a restaurant in Yiwu, East China's Zhejiang Province, has been relayed after it went viral on WeChat.

"I believe the Chinese government will handle it soon. It takes time," he said. "I believe Yiwu is still a very safe place."

Yiwu is where more than 13,000 foreign businessmen from more than 100 countries and regions live and do business.

"I have lived in China for many years and my children are also growing up here. Both the government and the local people are loving and inclusive," said Luo, a foreign businessman in Yiwu.

"My family urged me to go back after the epidemic outbreak, but this is a tough time for China. I have to stay here with the Chinese people."

The efficiency and transparency of the Chinese government's response gave him a reason to reassure his family, he said.

"I told them that I believe China can handle it."

Many foreigners have chosen to stay in China and offer support.

Anne Li, 64, and Jade, both from South Africa, took temperatures as volunteers for people at a vegetable market in Tongxiang, Zhejiang Province.

Anne Li has lived in Tongxiang for 10 years. "This is what I have to do. Tongxiang is my second home. People here need my help," she said, adding that she was not afraid at all.

"I feel sad about the epidemic and for the medical staff and police officers fighting on the frontline," Jade said, but she is proud of the unity around her.

Jade said she did not feel fear at all. "I believe that each of us has the courage and faith to overcome difficulties."

"Our life will be good only if China is good. Helping the Chinese is also helping myself. The only thing to do now is to work hard and keep at it," said foreign businessman Ma Mo (Chinese name).

Most popular in 24h